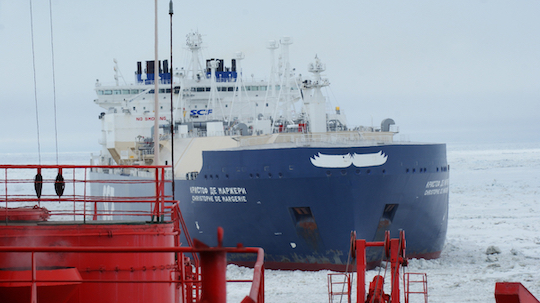 For the first time on record a large ship has transited the Northern Sea Route (NSR) in May, weeks ahead of the normal July opening of this key Russian waterway. , an icebreaking LNG carrier owned and operated by SCF Group, completed its passage across the NSR, bound for China with a cargo of LNG for the Yamal LNG project.

The transit is another sign of the climate crisis hitting Siberia. The latest climate report by state-backed Roshydromet shows average winter temperatures along the NSR have increased by about five degrees since the 1990s. Temperature maps from Roshydromet show that another heat wave in mid-May swept over the region. In parts of northern Siberia, including the remote Arctic peninsulas of Yamal, Gydan and Taymyr, the average temperature on May 23 were as much as 16 degrees Celsius higher than normal.

The passage of the blue-hulled LNG carrier from the Port of Sabetta to Cape Dezhnev took the vessel 12 days to complete, during which the ship covered 2,563 nautical miles.

Igor Tonkovidov, president and CEO of Sovcomflot, commented: “This successful voyage across the NSR, in May, allows us to move one step closer to realising the full transit potential of the Northern Sea Route, marking an important expansion in the shipping opportunities available to Arctic industrial projects in particular. Even in the challenging ice conditions encountered during this time of the year, choosing the NSR allows for a significant reduction in the length of a voyage delivering LNG to APAC ports compared with using the Suez Canal. A shorter voyage both allows to optimise logistics and reduce the carbon footprint of the shipping. What’s more, the vessel that began this new era in Arctic shipping both carries LNG, the cleanest fuel currently available, and uses LNG fuel herself.”