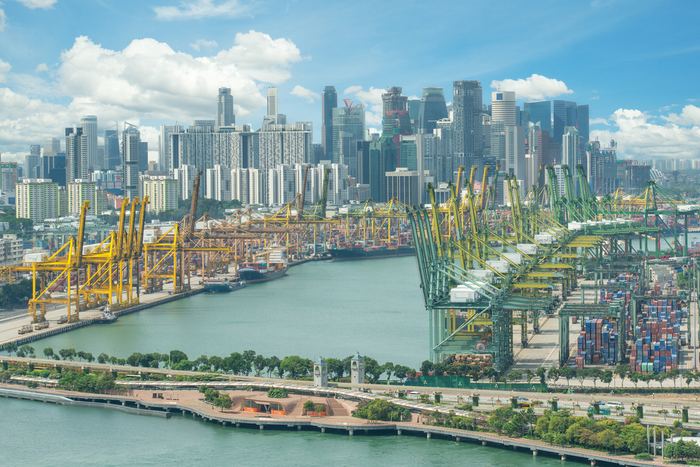 The ports of Singapore and Rotterdam have worked on sharing digital best practices since 2017 and are also part of the chainPORT network of global container gateways. Photo credit: Shutterstock.com.

The operators of the ports of Rotterdam and Singapore are working with three software providers to link with the two most prominent container data-sharing networks, promising a seamless exchange of operational data and shipment transactions.

An agreement announced Tuesday includes the Maritime and Port Authority of Singapore (MPA), the Port of Rotterdam Authority, terminal operator PSA International, and software providers CargoSmart, TradeLens, and GeTS.

The software providers involved in the agreement signify the importance of creating interoperability between various data platforms linking global containerized shipments, notably TradeLens, a Maersk/IBM-led blockchain initiative, and CargoSmart, which is developing a competitive data-sharing platform called the Global Shipping Business Network (GSBN). GeTS, is a Singapore-based software developer that’s built, along with PSA, the Port of Singapore’s port community system, known as Calista.

Better coordination between ports could create more efficient operations at key gateways. If, for example, data around a vessel departure in Singapore and the cargo aboard the vessel is shared directly with Rotterdam, it could theoretically allow cargo owners and their representatives in Rotterdam to plan earlier to retrieve their containers. Data sharing could also help customs agencies in both countries to align earlier.

The agreement between Rotterdam and Singapore emphasizes the need for systems, whether built for use in specific ports or those intended to link ports, to use application programming interfaces (APIs) to allow data to be shared more efficiently.

“Port authorities have developed or are developing maritime single windows to implement IMO’s Convention on Facilitation of International Maritime Traffic to facilitate the electronic exchange of information for port clearance,” MPA said in a statement.

The importance of being interoperable

The port authority said the data standards and API initiatives will support its digitalOCEANS initiative, “where individual data platforms of port authorities, port operators, shipping lines, logistics companies and platform providers can exchange data and interoperate through a common set of APIs.”

Along with its partners, MPA will hold a series of technical workshops to design, test, and publish the API specifications, the authority said.

“Different players in the maritime ecosystem are pursuing digitalization at varying paces,” MPA Chairman Niam Chiang Meng said in the statement. “To truly reap the benefits of effective information exchange, we need to move beyond digitizing single nodes in the maritime supply chain.”

Interoperability between TradeLens and GSBN will be of particular interest to parties that use one or both platforms and could help break geographical barriers between the two initiatives.

“To enable further digitalization, establishing single standards is a prerequisite, so this is a good initiative,” Andy Lane, port expert and partner at CTI Consultancy, told JOC.com. “It might require a separate or neutral entity to drive it, however, which might be an existing association such as (the International Association of Ports and Harbors) or a new entity. The primary challenge will always be reaching fast consensus and moving expeditiously forward with frameworks.”

Lane added that it will be important to ensure there is no overlap with work underway by other associations. “Otherwise, the risk of the creation of two single standards exists,” he said. “Close coordination with, for example, (the Digital Container Shipping Association, a standard-setting consortium of nine container lines) will likely be required.”

Large gateways in Asia and Europe are eager to create data-sharing opportunities on multiple levels: from a tactical level that supports shippers’ supply chains, from an operational level to better utilize existing port assets, and from a planning level to base future infrastructure needs upon.

Both Singapore and Rotterdam are members of chainPort, a 12-port network led by the Port of Hamburg to determine digitization opportunities between key container gateways in Europe, North America, and Asia. The two ports have worked together since 2017 in sharing digital best practices and serving as a platform for maritime-focused startups to trial their solutions.

Rotterdam has also been tied to CargoSmart since 2017, using the software provider’s vessel schedule data to support its online route planning tool, Navigate, which allows shippers to find and compare routes to and from the Dutch port.