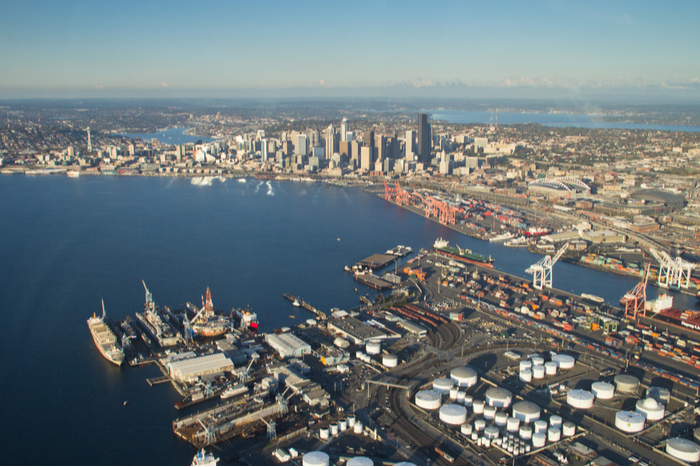 The National Labor Relations Board’s decision highlights the competition that exists between the machinists union and the ILWU for maintenance and repair work at West Coast ports. Photo credit: Shutterstock.com.

The National Labor Relations Board (NLRB) has awarded jurisdiction for maintenance and repair work at Seattle’s Terminal 5 to the International Association of Machinists (IAM) instead of the International Longshore and Warehouse Union (ILWU). The NLRB, however, said both unions presented a strong case for jurisdiction, and cautioned that the decision does not set a precedent for other disputes between the unions.

The NLRB’s July 16 decision highlights the competition that exists, and is expected to continue, between the IAM and the ILWU for lucrative M&R work whenever openings occur at new or renovated terminals on the West Coast.

Seattle’s Terminal 5 (T-5) facility has been in a state of flux as it transitions from the former tenant, APL, to the new owners, SSA Marine and Terminal International Ltd., which signed a long-term lease with the Northwest Seaport Alliance (NWSA) last year.

APL, which employed IAM mechanics, left in 2014. The facility has been largely vacant since then, with Matson Navigation’s Hawaii service temporarily calling at the south end of the terminal. ILWU mechanics have been performing the M&R work at the terminal and will retain that work when Matson consolidates its Hawaii and Alaska services in Tacoma later this year.

The dispute over future M&R work at T-5 began in March 2019, when SSA filed an unfair labor practice claim against the IAM, alleging that the machinists union threatened to take job action to force the employer to assign the work to the IAM. Under terms of the SSA-TIL lease with the NWSA, the terminal operators will invest $300 million in the renovation and modernization of the 172-acre terminal. When phase one is completed next year, the terminal will handle mega-ships engaged in the trans-Pacific trades for a yet-to-be determined shipping line or alliance.

The ILWU and IAM have competed for jurisdiction over M&R work involving chassis, cranes, and cargo-handling equipment in the ports of Los Angeles, Long Beach, Oakland, Seattle, and Tacoma for decades, with the NLRB often called upon to decide which union will have jurisdiction.

The NLRB said the IAM and ILWU both have a legitimate claim for jurisdiction in the Terminal 5 dispute based on their existing collective bargaining agreements with SSA. “Both unions have contractual provisions that arguably give them a claim for the work in dispute,” the NLRB said.

In its decision, the board said it considered factors such as employer preference, skills and training of the workers, and efficiency of operations, adding the determination “is limited to the controversy that gave rise to this proceeding.”

Bath Iron Works union threatens strike, says contract proposals “would not only create a workforce of poorly paid subcontractors but also force more than 1,200 mechanics with over 30 years of service into early retirement, taking with them a vast amount of shipbuilding knowledge and expertise.”