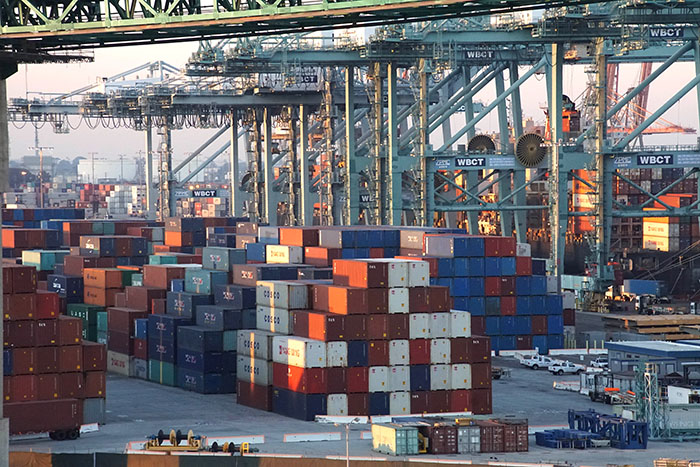 Trucking operators on Thursday called on ocean carriers to temporarily suspend detention and demurrage fees at the ports of Los Angeles and Long Beach as the largest US port complex works through unprecedented congestion issues.

Weston LaBar, CEO of the Harbor Trucking Association (HTA), said the HTA and the California Trucking Association (CTA) are also asking carriers, terminal operators, and the port authorities to do more to address the well-documented congestion issues the ports face due to record import volumes. If no progress is made soon, the HTA and CTA will ask the US Federal Maritime Commission to step in, he said.

“We are in a meltdown,” LaBar told JOC.com. He said carriers and terminal operators should take advantage of measures at their disposal to reduce congestion, such as adding weekend gates to vacate empty containers to outbound vessels. He also urged the terminals to work cooperatively with beneficial cargo owners (BCOs) and truckers to build more peel-off piles to rapidly move import loads from the terminals to free up more terminal space.

“If there is a segment of the supply chain that is struggling, we’ll feel it at the terminal because everything touches the marine terminal,” said Alan McCorkle, president of Yusen Terminals in Los Angeles.

When containers backed up at Yusen a few weeks ago, the terminal operator acquired space adjacent to the facility to store empties, but then that space filled up. Then eastbound trains began to experience delays on the rail networks that caused containers to back up, so Yusen acquired additional space nearby to store rail containers, but that space is now full.

“We did this at our expense,” McCorkle said. “The problem is that the volumes into LA-Long Beach are so great that the whole system is stressed.”

Import volumes from Asia in Los Angeles-Long Beach have been increasing at more than 20 percent year over year each month since August, according to PIERS, a JOC.com sister company within IHS Markit. Non-vessel-operating common carriers (NVOs) have told JOC.com their bookings are strong into late November, and they expect the record volumes to continue until the Lunar New Year in February.

Marine terminal productivity at individual terminals is inconsistent, varying from day to day and by day of the week depending upon vessel arrivals, said Scott Weiss, vice president of business development at the logistics provider Port Logistics Group.

“There are times where we can be extremely productive at a terminal,” Weiss said. He cited a vessel being unloaded Thursday at an SSA Marine terminal in Long Beach. “We were given free flow/no appointment/no line and a special gate, and were able to pick up 20 containers in two hours last night,” Weiss said.

Ed DeNike, president of SSA Containers, said SSA’s three terminals in Long Beach tend to have less congestion than other terminals because SSA drays container imports from the terminal as soon as they are discharged from the vessels, which helps to lessen yard congestion. SSA, which began its dray-off program more than a decade ago, is the only terminal operator in Southern California with a formal dray-off program.

However, SSA is now facing a nagging shortage of chassis, which are needed to execute those drayage moves. “Our issue is chassis. It’s making it harder to dray off,” DeNike said.

Truck turn times at the 12 container terminals in Los Angeles-Long Beach have deteriorated the past three months. The average turn time in October was 81 minutes, according to the HTA’s truck mobility data. That was up from 77 minutes in September and 70 minutes in August.

Skilled labor availability is also a growing problem. The Pacific Maritime Association (PMA) is rationing the number of equipment operators sent to individual terminals in order to keep them all operating, but that means some aren’t getting their full complement of labor, said Jim McKenna, president of the PMA, which represents West Coast terminal operators as well as ocean carriers.

As containers back up at the terminals, labor productivity decreases because workers are shuffling more containers around in the stacks to get the box they need. This creates an artificial shortage of equipment operators, McKenna said.

“We have to clean up the container yards, but the volume keeps coming in,” he said, adding that the container backlogs are especially large on Mondays because many of the vessel calls occur over the weekend, he said.

DeNike noted that employers have stepped up their training programs for equipment operators, but volumes keep growing faster than the workers can be trained.

Vessel bunching is also a problem. Kip Louttit, executive director of the Marine Exchange of Southern California, reported that there were seven container ships at anchor and awaiting berths at noon on Thursday. That was down from 11 container ships at noon on Wednesday. However, a vessel backlog was scheduled to build over the weekend.

Terminal operators maintain a constant dialogue with the trucker community, and they attempt to offer extra gates and facilitate dual transactions as best they can, said a spokesperson for APM Terminals.

APM Terminals Los Angeles is “offering extra truck gates. We’re observing that about 65 percent of the drayage haulers are able to complete dual transactions, which is a positive trend for equipment flows. However, we are seeing a 40 percent no show/cancellation rate in our trucking appointments, which is higher than normal and indicates a broader challenge in the trucking community,” the spokesperson said.

Even when a terminal attempts to respond to the needs of truckers, unanticipated residual issues can surface. For example, Fenix Marine Services in Los Angeles generally does not place limitations on the return of empty containers, said Scott Schoenfeld, general manager. However, in one recent week, volumes were so strong that Fenix informed truckers they could only return an empty container if they took delivery of an import load, which should have generated more dual transactions for truckers.

“When we did that, for just one week, our appointment volumes dropped off,” Schoenfeld said, indicating that as desirable as dual transactions can be, they are difficult to arrange on a consistent basis.

CLIA: Cruise lines extend suspension of operations from US ports until mid-September

About Wordfence Wordfence is a security plugin installed on over 3 million WordPress sites. The owner of this site is