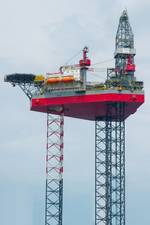 The rig, named Hild, was built to Keppel’s KFELS Super B Class design. The Hild is the sixth jack-up that Keppel has delivered to Borr Drilling, out of the 11 that have been ordered.

It is capable of operating in 400 feet water depth and drilling to 35,000 feet. The jack-up is equipped with a maximum combined cantilever load of 2,700 kips and high capacity hook loads of two million pounds

Following this delivery, Borr Drilling will have nine KFELS B Class and two KFELS A Class rigs in their fleet.

Keppel’s KFELS B Class designs have a market share of about a quarter of all jack-up rigs delivered since 2000.  Keppel O&M had previously delivered the Saga, Skald, Thor, Hermod, and Heimdal jack-up rigs to Borr Drilling.

The Heimdal jack-up was delivered in January 2020, which was Keppel’s first rig delivery of the year.

Offshore Engineer has reached out to Keppel to ask about delivery schedules for the remaining rigs, and any potential impact of the COVID-19 and low oil prices on the deliveries and shipyard operations.

Keppel declined to comment citing “a black out period,” adding that more details will be revealed during Keppel Corporation’s results presentation on April 29.

The blackout period is Keppel’s policy to refrain commenting on the industry outlook and business and financial performance two weeks and one month before the release of its quarterly and full-year results, respectively.

As recently as late February, Borr had expected the demand for modern jack-ups to grow, forecasting there would be a requirement for more than 40 additional jack-ups to address the planned activity in 2020, setting the stage for further increases in utilization and day rates.

However, the forecast was given prior to the global hiatus caused by COVID-19 and oil prices dropping to historic lows.

Offsetting the termination somewhat, the company also said it had been awarded LOAs for work in the Asia Pacific region for two of its premium jack-ups, of which one is a newbuild being activated.

Warning of further potential contract terminations, Borr Drilling last week said: “Some of our customers are unable to continue safe operations in the current circumstances, are experiencing difficulties in their respective supply chains and have announced cost-saving initiatives.

“Further, a number of customers have contractual rights in place to suspend operations in certain circumstances, and we could be subject to further suspension notices in light of market conditions,” Borr said.

“At this stage, the company cannot predict with reasonable accuracy the duration of such suspensions if exercised or the impact on the company.”