A total of 302 of 2,693 containership sailings, or 11%, have been canceled in May on all the main line trades, according to the latest data from maritime intelligence company eeSea, revealing the extent of the impact of COVID-19 on global shipping.

However, the number of sailings alone only tells part of the story. Commenting on the numbers, Simon Sundboell, CEO and Founder of eeSea, said, “Understandably, ‘blank sailings’ are the talk of the town among container shipping and supply chain professionals these days. But to truly understand the impact, you need to look beyond the daily trickle of carrier advisories and the number of canceled sailings. Instead, you need to look at the reduction of container shipping capacity and the pattern that is forming for the weeks and months ahead.” 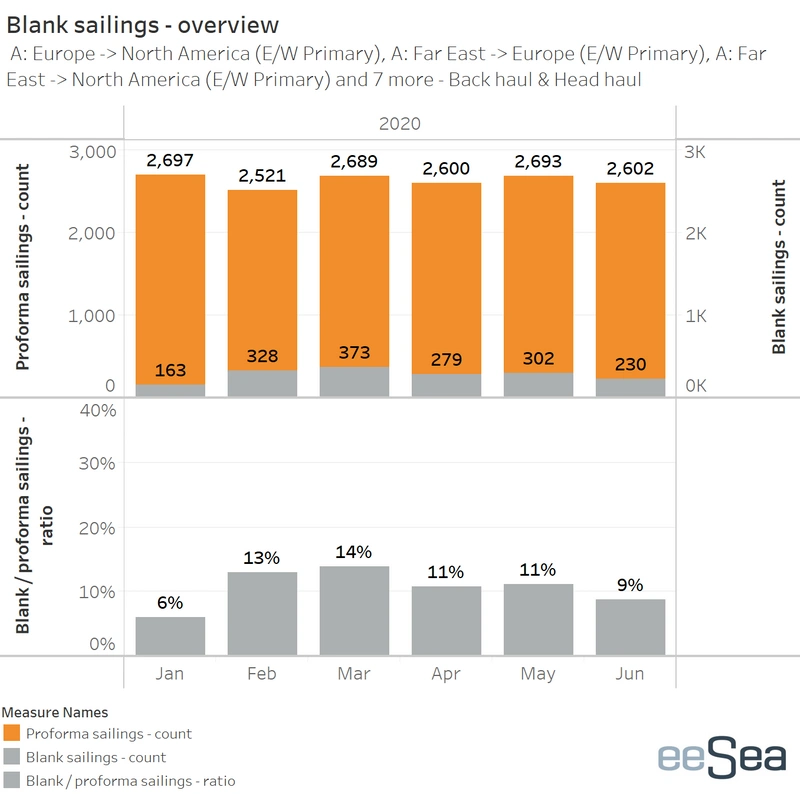 Accounting for variations in vessel capacities between services, as well as taking into account entirely ceased services (beyond blanked voyages and temporarily suspended services), the resulting reductions in capacity offers a similar picture. However, the critical information is in the detail.

On, for example, the Far East – North America eastbound head haul (including Suez services), the actual deployed vs proforma capacity ratio, after blanks and suspensions, for May is 80% – almost as big a reduction as the February ratio of 71%. YoY (year-on-year), including discontinued services, the reduction in May is 21%. 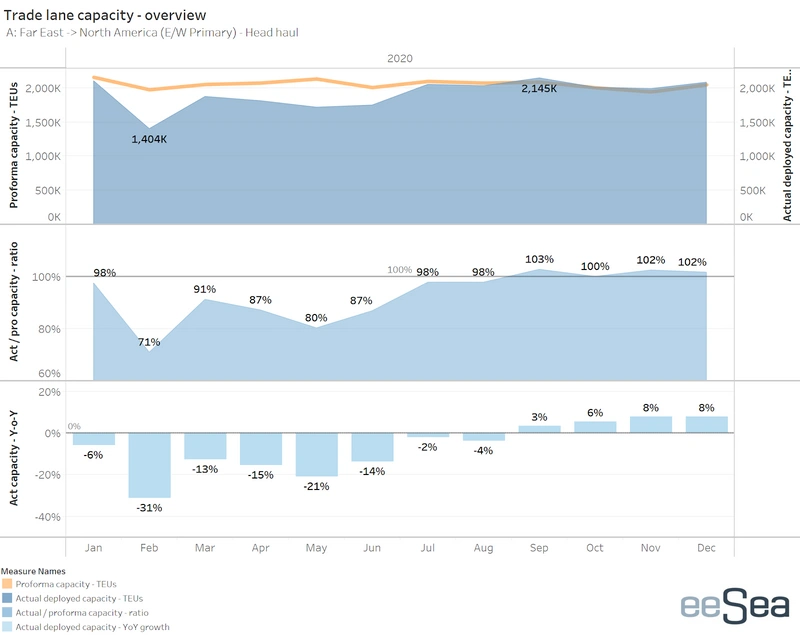 eeSea produces these numbers globally, for all trades, services and carriers, down to a daily port departure level.

Says Simon Sundboell: “If I were a shipper in Asia or a buyer in Europe, this is the number that is critical to my business, including whether my shipments could be at risk; and how to plan contingencies.”

The other benchmark head haul trade, Far East to Europe westbound, shows similar capacity reductions. Details are outlined in the appendix below; of note, however, is that in June Ocean Alliance will overtake 2M as the largest alliance on the trade lane for the first time since Oct 2019.

Carriers and ports are likewise offered these numbers for benchmarking purposes.

“A lot is happening these days, and it can be hard to keep a tab on it. This is why we at eeSea track it all in real-time. We map blanked – or ‘void’ – sailings, as well as discontinued and suspended services, as soon as the announcements are made. Sometimes announcements aren’t made, so we also track the carriers’ schedules frequently and discover unannounced blank sailings.”

Per April 22, the status on the major trade routes is as follows:

FAR EAST – EUROPE HEAD HAUL (Med + Northern Europe)
● Far East to Europe westbound will see 14% of sailings, or 18 of 127 sailings, canceled in April. This corresponds to a capacity reduction of 12%.
● This is down from 36% canceled sailings in February, and 21% in March. Currently, 19% of sailings in May are already announced as canceled, and 12% in June.
● THE Alliance has canceled 22% of their April FEA-EUR sailings, and already canceled 32% in May and 34% in June. 2M and Ocean Alliance are at respectively 12% and 10% in April, and 16% and 12% in May. However, it should be noted that Ocean Alliance canceled 40% and 30% of FEA-EUR sailings in February and March.
● Over the six-month period from January to June, the alliances have canceled 18% of FEA-EUR sailings, with Ocean Alliance at 17%, THE Alliance at 23% and 2M at 14%.
● With the currently announced capacity reductions, 2M will drop below Ocean Alliance in actual deployed capacity in June for the first time since Oct 2019.
● For the first half of 2020, the current announced reductions amount to a 17% YoY drop in deployed capacity, from 11.2m in 2019 H1 to 9.5m TEU in 2020 H1.