Cargoes have come off ships at sea it seems like forever.  Some years ago a ship suffered a casualty transiting the English Channel in a storm.  Much of its cargo of lumber and other floating items washed ashore on the southwest English coast.  Before the authorities could arrive, enterprising local residents gathered it up.

Nowadays, the majority of non-bulk cargo is carried in containers.  Container ships have gotten larger and are capable of carrying thousands and thousands of containers.  The ships have greater length, greater breadth, and greater draft.  They also have greater air draft.  Containers at or near the top of each stack swing through a greater arc as the ship rolls than do those located at or near the bottom of the stack.
One source estimates that approximately 10,000 containers are lost at sea annually due to falling overboard from underway vessels, but it is unclear how this estimate was derived.  Given the millions of annual container transits, this is an impressive testament to good cargo handling and seamanship.  The World Shipping Council, an association of the major container shipping companies, representing 80% of the total global vessel container capacity, states that ships of its members lost an average of 1,382 containers annually during the period 2008-2019.
Until recently, governments only got involved in container losses if they created a hazard to navigation (such as by floating) or if a hazardous cargo were involved.  Otherwise, the loss was treated as an insurance matter between the involved parties.

Lately, though, governments have shown great concern about containers lost within their territorial seas (generally 12 nm offshore) and potentially further, particularly if the cargo is deemed hazardous.

In February 2014, the container ship Svendborg Maersk lost 517 containers during heavy weather while transiting the Bay of Biscay.  At the request of the French government, Maersk hired a survey vessel which located most of the containers so that fishing vessels would not inadvertently entangle their nets.  One of the lost containers later washed ashore in England unleashing 11 million very wet cigarettes.  This incident ranks as the largest recorded overboard container loss to date.

On 31 May 2018, the container ship YM Efficiency lost approximately 80 containers during heavy weather off southeast Australia.  The owner paid for recovery and cleanup of containers that washed ashore or were found in the vicinity of the coast but has allegedly denied responsibility for recovery of containers on the seafloor in deeper waters.

On 1 January 2019, the container ship MSC Zoe reported the loss of approximately 342 containers during a storm in the North Sea.  Most of the containers soon washed ashore on the Frisian Islands of the Netherlands and Germany.  The Netherlands government has opened an investigation into the incident.

On 24 May 2020, the container ship APL England lost 50 containers in waters about two kilometers deep during heavy seas about 73 kilometers southeast of Sydney.  Fifteen containers have washed ashore but the others remain missing.  A formal written undertaken of $22.5 million was required before the vessel was released from detention to ensure remediation of all impacts of the incident.  The owner has been directed to search the seafloor for the containers and recover containers as agreed with the Australian Maritime Safety Authority (AMSA).  Charges have been laid against the master for pollution and/or damage to the Australian marine environment as a result of poor cargo loading.  The incident is under investigation.

On 22 June 2020, a deck barge under tow from Honolulu to Hilo lost 21 containers in a storm.  The US Coast Guard is requiring the operator of the barge to locate and recover the containers.  The incident is under investigation.
On 26 June 2020, the container ship Navios Unite lost three containers in rough weather approximately 33 nm off southwest Australia.  The Australian Maritime Safety Authority (AMSA) immediately launched an aircraft to search (albeit unsuccessfully) for the containers but has issued no follow-up reports.

There are indications that the design of modern container ships may be a significant factor in the loss of shipping containers overboard.  These ships are designed chiefly to achieve two goals: maximize carrying capacity and operate efficiently at high speed.  Thus, the ships have wide bow flare and wide beams that minimizes frictional resistance as the bow passes through the water.  As the wave crest moves aft, the bow pitches down.  If the seas are on either forward quarter, this causes the ship to roll.  Due to a combination of the vessel’s speed and the offsetting wave action, the roll can sometimes become synchronous resulting in increasing roll.  The dangers are exacerbated in vessels with flat sterns and in heavy sea conditions.  The combination of all these factors can result in parametric rolling.  This condition can occur very rapidly, going from moderate rolling to rolling in excess of 30° in just a few wave cycles.  Parametric rolling has been implicated or suspected in many of the instances cited above.  Naval architects and ship designers would do well to include this consideration in their future work.  Masters and deck officers of container ships should be alert to signs of parametric rolling and take immediate action to ameliorate the situation. 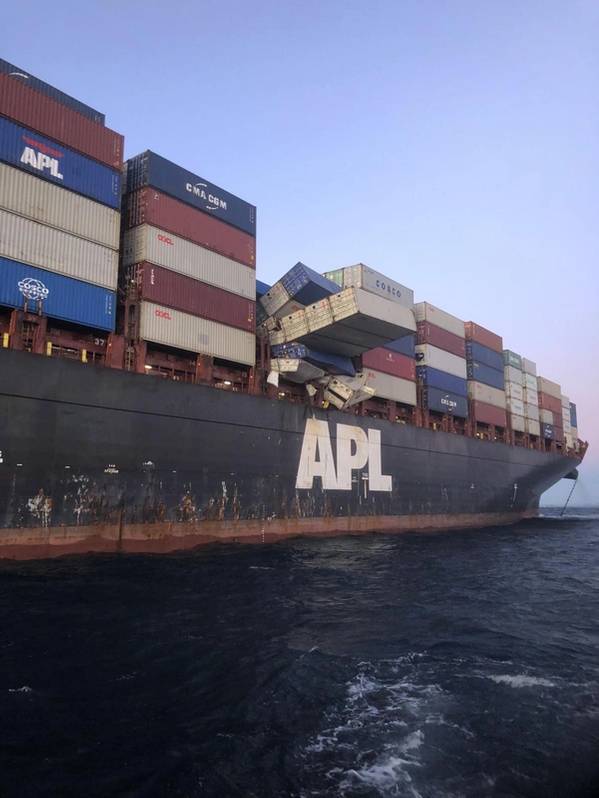 The APL England lost at least 50 containers in heavy seas off the coast of Australia in May 2020. (Photo: Australian Maritime Safety Authority)

A few random questions about container ships at sea