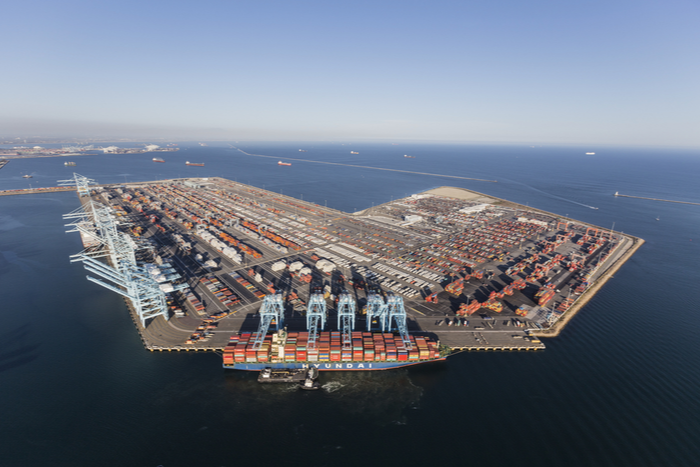 Container availability and gate information exchange processes are being digitized across a number of terminals in the Southern California ports. Photo credit: Shutterstock.com.

The new offering is intended to aid shippers in coordinating container retrieval by providing more real-time data directly into shippers’ transportation or logistics management systems. Traditionally, such information is conveyed via electronic data interchange (EDI) or in a less formalized mechanism, such as email or text.

The APIs will initially be available for import availability and vessel schedules at APMT’s Pier 400 terminal in Los Angeles and its facility in the Port of Mobile. Fifteen more terminals in the company’s global portfolio will be added by the end of the year, the company said in a statement Thursday.

“We have co-developed our APIs with customers looking for real-time data to give them better visibility at the container terminal level,” David Francis, APM Terminals head of digital customer solutions, said in the statement. “Once a customer queries a container or multiple containers, they’ll receive the latest status of the container instantly.”

The addition of API connectivity at Southern California terminals continues a pattern that has developed throughout 2020 at North America’s biggest container gateway. In May, Fenix Marine Services launched a new “auto in-gate” program at its Pier 300 facility in Los Angeles. That program digitizes the data exchange between truckers and the terminal to help Fenix Marine better process trucks at the gates and within the container yard.

The automated Long Beach Container Terminals uses a pre-verification of shipment data submitted by beneficial cargo owners (BCOs) and truckers to reduce waiting times for drivers at its facility.

Software vendors like Advent e-Modal and Voyage Control have contracted with various terminals in Southern California to provide better container status information to the drayage community. And pure play visibility providers like Blume Global, Crux Systems (acquired in 2019 by Flexport), Terminal 49, and OpenTrack are working with shippers and third-party logistics providers to integrate container availability status data directly into the systems those parties use to manage global logistics.

APMT’s move to provide more real-time access to data complements its sister company Maersk’s efforts to develop a blockchain-based global platform for container visibility called TradeLens, software Maersk developed and sells in tandem with IBM. A large proportion of participants in TradeLens have been terminal operators.

It also echoes moves that APMT competitor DP World has made to provide data-related services to complement its physical port operations. DP World joined TradeLens in May.

APMT customers can get access to the APIs on a 90-day free trial, the terminal operator said. There are plans to broaden the API offerings, including potential development of an “APM Terminals API Store.”